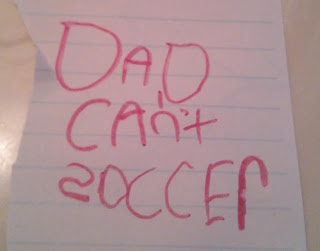 A few nights ago, Big Daddy was outside playing soccer with the kids. It was his turn with the ball and he gave it a good solid kick. Brother ran after the ball and a few steps into his sprint, he fell and scraped his knee. When Big Daddy went over to check on him, he looked up with tears in his eyes and promptly told Big Daddy, “Dad, you are not allowed to play soccer…ever again.”

Big Daddy told me this story once we were all settled in for the night and said he just didn’t understand why he wasn’t allowed to play soccer again. He didn’t push Brother down, he just kicked the ball and Brother fell on his way to get it. Oh, the power of a three year old’s wrath.

Since then, poor Big Daddy has been taunted by the rest of us about his inability to EVER play soccer again. Each time, he reminds us of his innocence and takes it with a grain of salt. Until he came home from work today and was handed this sign made by his loving children. Their Mom may have told them how to spell the words. But, I actually spelled out, “Dad can’t play soccer” and since that’s not what they wrote, I’m not taking any blame.