Since we married ten years ago, J. and I have lived in six states. One of the fun things about moving so often is getting to see all of the local foods and traditions in each area. Each place we’ve lived has had something that spoke uniquely of that state or region.
North Carolina is famous for their BBQ. The region of South Carolina where we lived was known for their yearly Okra Festival (known locally as the Okra Strut!) Maryland, of course, is well known for their crabs. We all know about Maine and their lobstahs.
I hesitate to mention this one because it’s a little on the um, disgusting side. In Montana, they had a yearly Rocky Mountain Oyster festival. They advertised on billboards. If you don’t know what that is, google at your own risk. Just heed this warning, they are not of the sea. 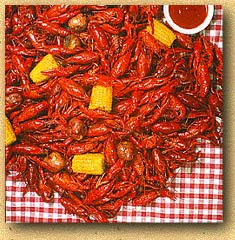 Photo Credit
Before we ever moved to Louisiana, I’d heard that they had some pretty hearty culinary traditions. Their love of crawfish is known worldwide. The beignets are to die for. Seeing alligator on the menu doesn’t even cause me to gag anymore. I guess you could say I’ve gotten used to the foods they love in this great state.
At least that’s what I thought until this past weekend.
We headed out to a beautiful local park that stretches along a bayou. There are tons of turtles and ducks that gather when they see kids coming with a bag of stale bread and since we had a cabinet full (I blame our lack of carb eating on the insane HEAT), we were easy targets for the park dwellers. As we were standing there feeding the ducks, I caught a glimpse of something about three feet to our right. It hopped in the water and swam over to where the ducks were and took part in the breaking of the (stale) bread.
I turned quickly and yelped, “Kids!! Look at that….um, that….that thing right there!” (One of my finer moments, indeed.)
There was a sweet local lady nearby who casually stated, “Oh, that’s a nutria rat! They eat those down in south Louisiana.” With that, she went back to her book and left me with my jaw on the ground. The dirty gigantic rat poo infested ground. 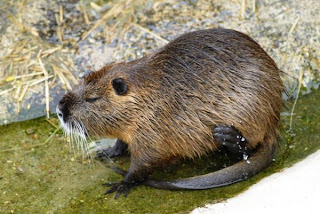 Look at that thing. Don’t you want a bite? If you do, google Nutria Rat Recipes, again at your own risk. Not that I did that. I’m just sayin’.

Feel free to share your own local delicacies. Even the really gross ones.

« Warning: You May Get a Cavity
Someone Should Tell That Girl on The Bachelorette That This is What Love Really Looks Like »