My Dad is a good sport. He has four children who see to it that he remains humble and has a healthy sense of humor. In other words, we tease him relentlessly.

One of the things that we have always given Diddy a hard time about are his fashion choices. I use the term fashion very loosely.

By the way, Diddy is the way he says that I pronounce his name…I have no idea what he’s talking about. Maybe his hearing is dwindling in his old age.

Back to my story. I think my ability to stay on track is dwindling in my old age.

In the past, Diddy has gone through phases in his shoe choices. When we were young, he was often in boots. These days, he’s most often in tennis shoes. The period of time in between found Diddy in a particular style of shoe and he would wear them, no matter the time of year. 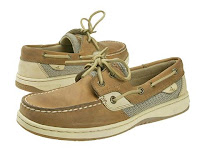 Boat shoes. No, he does not live or work on a boat. He doesn’t even own a boat. We teased him about his boat shoes but he was not phased. He swore that these were the shoes to beat all others. They went easily from season to season. Summer time rolls around and these shoes are perfect because you don’t need a sock. Winter comes and Wah-La! Just add socks and you are all set. If you are feeling the need to be less casual in the summer time, you would just add a dress sock with your boat shoes and it was still perfectly acceptable to wear shorts.

I think you can see why we tease.

This morning, the youth group led the service at our church. As I sat and listened to the thirty or so teenagers on stage leading worship with their beautiful voices and instruments, I was startled.

Over half of the kids on stage were wearing boat shoes! Apparently they are finally considered a trend among the young and hip. (Take note, Diddy. I said young. And hip. Not old and about to break a hip. I kid, I kid. My Diddy is young and hip! When compared to those in the nursing home.)

There were people wearing them with jeans, with shorts and with skirts. Most of them were girls, which I’ll be sure to point out to Diddy when I tell this story.

I’m sure he’ll appreciate it.

I had no idea that boat shoes were the thing now. You can add these to my list of things I never expected to make a come back.

« An Open Letter to Parents Magazine
Who Me? »